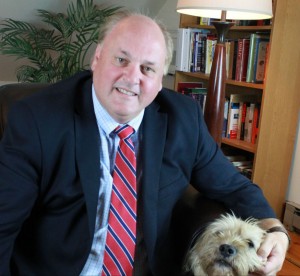 Many of Dr. Cox’s therapy sessions are done with his loyal associate Darcy

Adam J. Cox, PhD is a clinical psychologist, author, speaker and educational consultant. He has been consulting and writing about the emotional and cognitive development of youth for more than a decade. He is the author of On Purpose Before Twenty (FCP 2012; designated one of the “Best Courageous Books of 2014” by Parker Palmer’s Center for Courage and Renewal ); No Mind Left Behind: Understanding and Fostering Executive Control – The Eight Essential Brain Skills Every Child Needs to Thrive (Penguin/Perigee 2007) and Boys of Few Words: Raising Our Sons to Communicate and Connect (Guilford 2005). His commentary on youth, families, and schools has been widely covered by radio, television, and print media, including The New York Times, National Public Radio, and Newsweek. He served on the Board of Directors of the Children’s Arts Guild of New York.

Dr. Cox’s Eight Pillars model of executive function has been widely adopted by schools seeking practical solutions for learning challenges in the era of distraction. Although this framework was initially designed to promote academic performance, it is now employed to build diverse forms of capability among young people, including social awareness and vocational decision-making.

A frequent lecturer on child development, Dr. Cox was commissioned by the International Boys’ Schools Coalition (IBSC) to conduct a global school-based research project, Locating Significance in the Lives of Boys. During the research, he visited twenty project schools in the U.S., Canada, the United Kingdom, Australia, New Zealand, Singapore and South Africa. The results of this groundbreaking study – the first to interview students worldwide about how they find meaning and purpose in their lives – was presented at the IBSC International Conference in London in 2011; these findings provide a framework for a new understanding of the role of education in boys’ lives.

He has also developed experiential education and advisory programs in the US and abroad aimed at building diverse forms of capability among youth. He was the first scholar-in-residence at the Sydney Church of England College (“Shore”) School, Australia, where he worked with students, parents, faculty, pastoral care, and other community members.

In addition to writing, professional development consulting, and clinical work, he operates a small blueberry farm in New England. He writes a newsletter, Family Matters, and a blog, Ideas on Youth.