Warning: Use of undefined constant SINGLE_PATH - assumed 'SINGLE_PATH' (this will throw an Error in a future version of PHP) in /nfs/c06/h03/mnt/186942/domains/dradamcox.com/html/adamcox/wp-content/themes/responsive-child/functions.php on line 72
 America's Meritocracy Primes Unrelenting School Competition - Dr. Adam Cox
↓ Skip to Main Content 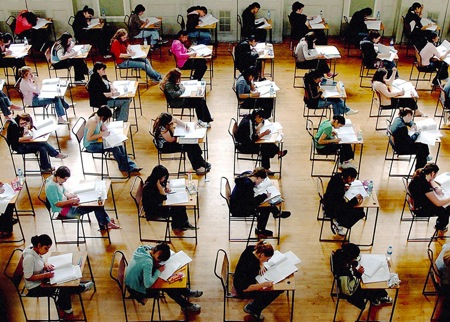 First, a confession. I am an idealist when it comes to education. I believe school is more than a means to an end, because I believe learning is one of life’s great privileges. Having said that, I have to take stock of how school actually unfolds for many. From the very first days, school is set up as a relentless competition; a survival of the fittest, a high stakes race to see who will collect the rewards for “winning.” It’s true that we put on smiles and a cheerful demeanor for virtually all students, but make no mistake – school is pure competition, and it’s the winners that garner the most respect.

This is the contest that pervades the daily life of every student. It is the real drama of school, no matter what we say is the purpose of education. Everyone knows that it’s all about getting the very best grades — and not because those grades represent a great achievement, but because they represent your ability to outdo the student to your left and right.

Why is it important to outdo others? Because the system is set up such that other achieving students threaten your security – your prospective access to opportunity and riches. So buckle up, take your Ritalin, and get ready to perform! It’s pretty close to a state of delirium, but it is culturally sanctioned madness. And what is the foundation of this race? Certainly, it is a broad cultural belief in a meritocracy. Americans, especially, subscribe to a philosophy of “earning it.” We take pride in the concept, brandishing this ethos widely in advertising and motivational speeches. Note that in America there is often little difference between the two!

Much of my professional life has been spent helping schools to close the gap between student ability and achievement. I am sympathetic to families who are afraid their kids won’t get through college. But at my clinical office, I see many kids way over-stressed by academics. Kids who long ago lost any perspective of balance, and who are now in an endless chase to be good enough. For whom?

Reason is left at the door as we begin the race every school day.It seems the only time that we step outside of this perspective, even temporarily, is when faith in meritocracy is overcome by an even more” fundamentalist” concern in American education – the core curriculum. It takes a violation of a community’s right to educate “as we see appropriate” to push an obsession with merit aside.

What does preoccupation with merit say about the value we place on human life that is sub-average with respect to cognitive abilities? How should we perceive gifted students, whose gifts are not necessarily academic? Are best-selling books titled “The Smartest Kids in the World” actually truthful? Isn’t there a difference between being smart, and simply succumbing to a pervasive system of competition? Is there an argument to be made that obsessing about one single aspect of development is dumb, rather than smart?

The main point I want to make is that competition is, at present, the essential experience of school. Thus all the conversations, assemblies, and small chats we may have about other values are like so much spit in the wind. Competition rules the day. Thus it is not surprising that we think of school as a means to an end, rather than a place to actually become educated. Ironically, I don’t believe anyone bemoans this fact more than teachers themselves.